What is Climate Change?

It’s the thing that everyone is talking about. It’s a thing that some politicians don’t “believe in”. It’s something about Noah Wyle and polar bears, about SUVs and Priuses, Republicans and Democrats. So what is it, really?

First, it’s important to understand the difference between climate and weather. According to Dictionary.com, weather is defined as “the state of the atmosphere with respect to wind, temperature, cloudiness, moisture, pressure, etc.” Weather is what it’s like out now. Climate, on the other hand, is long term weather. It is the average moisture and temperature of a region averaged out over many years. When we talk about Climate Change, we are not talking about that 60-degree Christmas we just had, or that really, really, cold day a few weeks ago where you had to wear long underwear under your jeans.

The temperature has increased 0.8oC (1.6oF) since 1880 (NASA). The climate is changing, faster in the last 50 years than in recorded history, and scientists expect another couple of degree rise in average global temperatures in the next 100 years (NRDC).

You may be asking, Is this the same thing as Global Warming? Yes. Well, kind of. Global Warming is a more simplified term that refers to this average temperature increase, but doesn’t take into account the fact that a few very small areas have gotten a little bit colder, and that there are also significant effects on precipitation. This picture from NASA shows how most of the Earth has gotten warmer, except for a few isolated areas.

According to the Columbia University webpage, carbon dioxide is the big player in Climate Change (but also has other vital roles in the environment, including allowing plants to create food for us to eat and oxygen for us to breathe).

All day, every day, and all night, the sun is radiating waves of all types, including visible light and ultraviolet light, to the Earth. Fortunately for us and for our skin, the atmosphere protects us from the majority of ultraviolet and other dangerous waves.

Most of the sun’s waves are absorbed by the Earth, and then radiated back out as slightly weaker waves. These slightly weaker waves, in the form of heat energy, are not powerful enough to escape through the atmosphere, and thus are trapped by greenhouse gases such as carbon dioxide inside the atmosphere. This has the effect of heating up the Earth, much like a greenhouse or a car becomes hotter than the outside air on a cool day.

Why should we care?

It will get a little bit warmer. There will be more heat waves, so heat-related illness will increase. Diseases that are spread by warm-weather species, like mosquitos, will spread faster and more easily.

According to the Natural Resource Defense Council, there will be more major weather disasters. Not only will there be more wildfires, but there will also be more floods and droughts. Disastrous (and expensive) hurricanes and snowstorms will occur more frequently (and already have, in the last decade).

National Geographic has a great article showing before and after pictures, including the picture below of the 4th largest lake in the world, which many people rely on for drinking water, shrinking in the last 14 years. 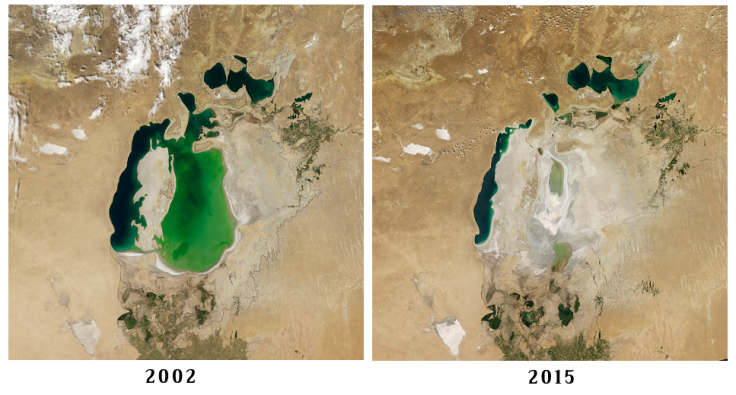 Lastly, we’ve all heard that glaciers are melting. At this rate, all glaciers in Glacier National Park will have melted by 2070. This is hugely problematic if you are a polar bear or other arctic species, but also if you live at or near sea level where all of this melted water will end up flooding.

Wait, we’re not responsible for this, are we?

The graph below shows how the average temperature has changed in the last 130 years, and how the amount of carbon dioxide in the atmosphere has increased comparatively.

But, if you think back to everything you learned on Earth Day in 4th grade, you can actually help prevent further damage. Carpool more, drive a Prius, and turn off the lights when you leave the room. That will help, a little. What we really need is to significantly limit the use of petroleum products, which release carbon dioxide into the atmosphere. We need significant improvements in cleaner energy sources, such as nuclear, solar, and wind power, to make these technologies efficient and cheap enough to be practical alternatives to petroleum. We need more research, more innovation.

What are you going to do to help?

Who have I cited and why?

I feel strongly that any statement masquerading as fact should have a source that is a peer-reviewed journal or a government or non-profit organization that provides link to peer-reviewed journals. As for why, that requires a longer lesson on controlled experiments and sample sizes. We’ll save that for next time.

Robin has been a professional nerd since 2011; that is, she is a 7th grade science teacher. She loves reading and watching science fiction and is working on creating her own young adult fantasy series. She prefers Star Trek to Star Wars because she enjoys the plot-driven social commentary, rather than fast-paced action sequences. She enjoys video games, but only those with graphic technology prior to 2003 because anything newer makes her dizzy.