Game of Thrones and What ‘ship May Never Be 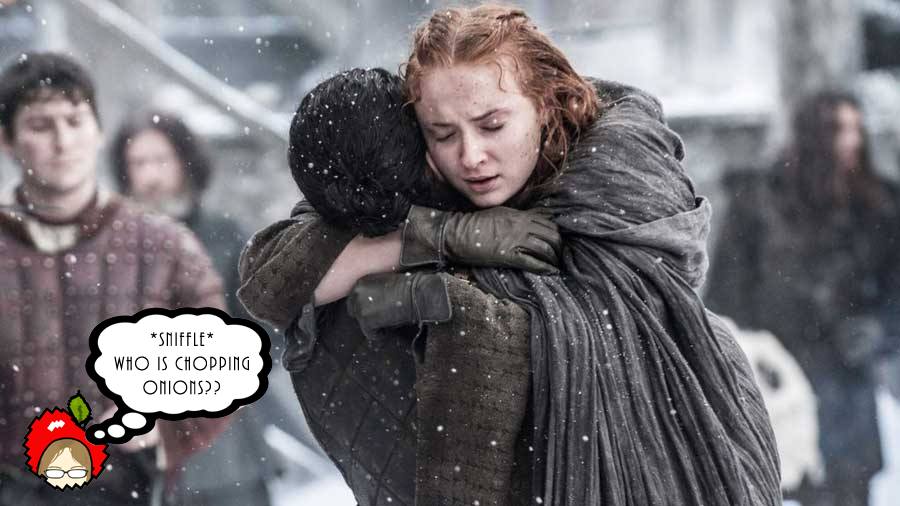 Season 6 of Game of Thrones has managed to blow me away week after week. I have laughed, cried and ranted until I have no more air in my lungs. If someone tells me they’re also a fan then you can bet I will drag them into a conversation about the show, books and world surrounding George RR Martin’s epic fantasy series. Who will end up on the Iron Throne? Which House do you support? How much did you cry when [redacted] died? And of course the age-old favourite – who are you shipping together as a couple?

We’re all guilty of shipping at one time or another. When I was 12 I wanted Yuna and Tidus together so badly when I played Final Fantasy X, as a Buffy: The Vampire Slayer I kept rooting for Xander and Willow – even after Tara died, I wanted them together. Last night whilst playing FFXIV after patch 3.3 went live the other day I was whispering that Aymeric and Lucia need to be together because I said so. Some ships make sense, others don’t. Some are ridiculous – and then there are some that simply shouldn’t see the light of day. Jessica Jones and Kilgrave? No. Hermione and Severus Snape? No. Cersei and Jaime Lannister? Weird enough. But people are taking the recent reunion of the very alive Jon Snow (TOLD YOU!) and Sansa Stark as a sign of a potential romantic pairing.

The reasons for this? Apparently, romantic chemistry. The way they look at each other. How relaxed they are with one another. Sansa made him a cloak. Jon likes redheads – Ygritte, Melisandre, Tormund… Who cares if they share a father and grew up together? They’re clearly madly in love and meant to be together!

No. NO. You’re free to ship who you want, but don’t seriously tell me this is going to happen. I have some real-life experience to throw your way, so suck it up.

I have five half-siblings on my dad’s side, and one on my mom’s. I grew up with two older half-brothers and one half-sister, and another brother and sister came into my life when I was a teenager. The two brothers I grew up with both spent a lot of time out of my life, as there is a ten year gap between us and I clashed frequently with my mom’s son. Now at 26 I only talk to my dad’s son who I grew up with, and my eldest sister who now lives in Canada. There is a distance between myself and all my siblings if I’m honest, which is a particularly painful thing for me. But when my brother and I reconnected after years of broken contact along with the loss of our mothers, it was an amazing moment when we hugged and got to talk over our issues. We are now in a position where we just ‘get’ each other.

Something I was reminded of when Jon and Sansa are sat at Castle Black, talking over their last time together. We didn’t actually see them talk to each other once before they all went their separate ways from Winterfell in the first series and she mentions him only briefly in the books as her father’s bastard son. It’s clear that Sansa takes after her mother Catelyn in looks and her attitude towards Jon as a living reminder of her father’s apparent affair. She apologises for being awful to him when she was younger, and he apologises for always sulking in the corner, not able to really mix with the Stark children due to his bastard status. After the hell that each of them have been through, they have a much better understanding of the world and how cruel it can be. Their father and Sansa’s mother were murdered, along with their brother Robb. They only know that Rickon is alive because Sansa’s evil husband Ramsay Bolton has him hostage. Arya and Bran are lost to them so they need they to stick together – especially with the real threat being just beyond the Wall in the form of the Night King and his undead army.

Jon Snow is not a Stark, something that is not going to play well in his favour. Sansa makes him a cloak like that of Ned’s perhaps to make him finally feel like a part of the family. That hug? THEY FINALLY FOUND A LIVE MEMBER OF THE STARK HOUSEHOLD. Sansa had just ran away from the sadistic Ramsay along with her broken foster brother Theon, Jon has just come back from being murdered by his brothers in the Night’s Watch, of course they’re going to be fucking overjoyed to see each other! They’re just so happy to not be alone in the world anymore, something I’m sure they’ll feel if they are reunited with Arya, Bran and Rickon.

As for Jon’s love of redheads… there might be an Oedipal thing there, what with his father’s red-headed wife hating him and berating him all his life, then he met red-headed Ygritte who also mocked him even after they were clearly in love with each other. Melisandre taunted him with her naughty bits, and Tormund… don’t tell me he doesn’t love Jon. The dick jokes after coming back from the dead kinda cemented that fact.

Yes, there have been cases of siblings falling in love. It’s a recognized phenomenon called genetic sexual attraction, and there’s usually factors in place that cause this – the thing that stops this is called the Westermarck effect, something that doesn’t happen if siblings grow up separated. Somebody quite rightly pointed out to me that this doesn’t explain how the Lannister twins are a thing, seeing as they grew up with one another and still fell in love. That is an anomaly, but besides that Jon and Sansa would have grown up together and experienced no attraction before this.

This whole ship makes my skin crawl. Incest is not something to be romanticised, there is a reason why it is taboo. Incest is a big issue, especially when consenting relationships between two relatives exist as well as non-consensual abuse happening too. Then there’s the problem with inbreeding, something which is actually covered in Game of Thrones with the madness highlighted in the Targaryen bloodline said to be a result of siblings having children. It’s also hinted that Joffrey’s violent psychopathic behaviour comes from being born of incest. 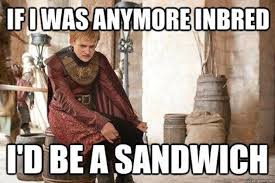 Ship it all you want. It’s still wrong as far as I’m concerned from my own experiences growing up with half-siblings and also the evidence from the show too. Can’t we just like two characters without wanting them to mash their genitals together? 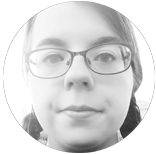