At their core, pop culture conventions are meant to be lighthearted, fun events where people with similar interests can meet like-minded people and embrace their nerdy sides. I can honestly say that on a good convention day, I wouldn’t rather be anywhere else. But conventions and the culture surrounding them have an ugly dark side, one that terrorizes women and men alike and thrives off of sexism. Cosplayers are groped, con-goers are attacked, and people are stalked, screamed at, and flamed. There’s an elephant out on the convention floor, and its sexual harassment.

Who’s your favorite female video character? What about your top ten favorites? How many of those female characters display ludicrous amounts of cleavage, ass, or legs?

Now, look up some cosplays of those characters, and read the comments. Take a shot every time you read a comment vilifying the cosplayer for wearing that same outfit. Finish your drink if you see “Slut” or “Whore”. Annnd now you’re dead.

On the con floor, many female cosplayers are cat-called, groped, and generally meant to feel unwelcome. Even outside conventions, cosplayers who choose to make replicas of the sexy costumes of their favorite characters face vitriol and gross harassment. On social media, female cosplayers are accused of being attention or actual whores for daring to show cleavage accurate to a character’s design. A design meant to pander to males in the first place. And even though women face the brunt of the problem, it’s not just men who are harassers. While less known, there are reports of ladies acting inappropriately with male cosplayers as well.

And if you’re thinking, ‘well why would they wear such revealing outfits they don’t want attention?’ ask yourself this. What sort of attention are cosplayers looking for?

There’s a lot I love about wearing a costume to a convention. I love seeing people’s eyes light up when they spot their favorite character, I love when people ask my permission to take pictures of a cosplay I’m proud of, I love when people high-five me and I admit, I do enjoy the compliments I get on my look. These are the forms of attention I hope for when I cosplay.When I’m getting ready for a con I put on my cosplay and I think ‘I hope other people enjoy this!’ I don’t put on my cosplay and think, ‘gee, I sure hope this gets people to violate me.’

Sexual harassment isn’t just limited to cosplayers either. Five years ago I was molested at a convention. It was my first big convention, and I’d changed out of my cosplay back into street clothes to go to a dance the con held. He was handsome, confident, and grown up, and I was fourteen, naïve and too young to understand the way he’d looked at me – too young to know that grown men don’t ask little girls to ‘dance’ with them. My story was not as isolated incident either, and I’ve heard many similar stories of young girls at conventions being taken advantage of by predators.

Three years after the incident I returned to the convention where I’d been assaulted, and almost as soon as I walked in my attention was caught by a booth run by young women who seemed to be handing out little decks of cards.

“We’re trying to raise awareness and help stop sexual harassment of cosplayers and con-goers.” One of the girls told me, energized, but gentle too. “Have you ever experienced sexual harassment at a convention?”

I bowed my head and mumbled yes, and the woman handed me a deck of colorful laminated cards. “Take these.” She said. I read the cards over.

“What you just did was harassment.” The red card said. “You have grossly stepped over the boundary of acceptable social communication.”

The yellow card was somewhat kinder. “What you just did was harassment.” It read. “Maybe you didn’t realize. In the future, think harder about the way your actions may be perceived.”

The only card I hoped I had to use was the green one. “You stepped in to help stop harassment.” It read. “Thank you.”

It brought me back to the people I saw four years ago; the people who saw me. What I remembered most about that horrible day wasn’t his hands tangled up in the hair hanging at my hips, but the people who looked at us and laughed as they passed me by, as if my gross violation were just an inside joke between them and the convention.

And maybe it was, at least at the time. But I truly believe that things are changing now. Sexual harassment is still a far-too-common problem in convention and cosplay culture, but the difference is that by now, people have noticed. Sexual harassment at conventions is no longer the shameful secret it once was. More articles are being written, more videos being filmed, more booths run, more outrage and cries for change. People are infinitely more aware of the fact that sexual harassment is a problem at conventions, and with that awareness comes change.

I don’t know if I’ll ever feel safe enough to go to a convention by myself again, but at least I can say that with the increased awareness of sexual harassment, conventions feel like places to have fun again. That booth that gave me hope last year wasn’t tucked into a dark corner, but set up so it would be impossible to ignore, and that alone displays a huge shift in the way sexual harassment is approached now. Sexual harassment is no longer an issue con-goers snicker at, and if we continue to call attention to the issue, then perhaps those who thrived under the shadow of shame and ignorance will find that they no longer have the cover they need to hide their wrongs.

I would love to see situations where I’d be able to use that green card those amazing women gave me, and I would like to personally ask any fellow con-goers reading this article to keep an eye out for harassment. Stopping sexual harassment can be as easy as stepping in and asking what’s going on, and the worst that could happen is that it was a misunderstanding and everyone is fine. Don’t be afraid to speak out and up! You may just become someone’s real-life hero. 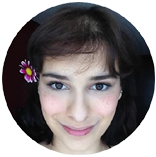 Rebecca is the daughter of two Mexican immigrants who lovingly support her nerdier hobbies. She is a cosplayer, con-goer, anime lover and lifelong writer who’s had several short pieces of fiction and poetry published under her very long name. She has also recently finished writing her first novel, a young adult adventure book with LGBT characters. She is a new college student and is currently majoring in biomedical engineering.