Write Your Heart Out! 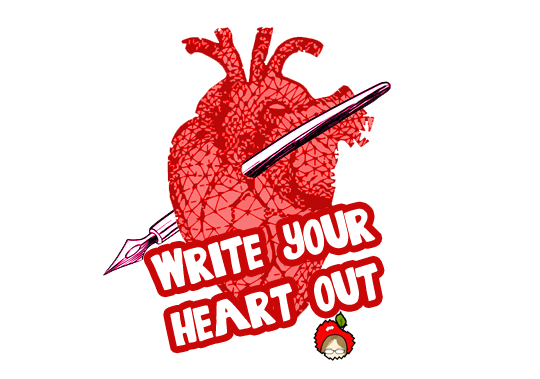 I have to be honest – when I sat down to write this piece, I wanted to start by explaining how I was introduced to NaNoWriMo… and then I realized that sometime between my first year participating (2012) and now, I completely forgot how I originally got involved in it. Thankfully, I do remember that that first year – I decided to participate a couple of months in advance, and spent most of October 2012 researching and plotting my first-ever NaNo project.

Unfortunately, that first year was the only year that I was also extremely involved in the local NaNo activities. I live in a small city but we have a fairly large number of participants here compared to our size, and our Municipal Leaders (MLs) were very active and great about scheduling plenty of gatherings – kick-off parties, write-ins, wrap-up parties and the like, as well as hosting online activities via the NaNo website and message boards.

But I’m the type of person who stretches myself too thin, which meant that in 2013 I didn’t get to attend any of the official events, though last year I did make it to the wrap-up party, and I’ve always been fairly active in our local Facebook group and official NaNo site message board. I have to admit that attending the write-ins were a big part of what helped me win NaNo my first year, though; I won in 2013, as well, but it was more due to my own stubborn nature than anything else, and last year I unfortunately didn’t even meet the halfway mark for word count before realizing how terribly behind I was and simply giving up entirely.

I also find it helpful that a handful of my Facebook friends participate in NaNo and post about it throughout the month of November. I may not be able to meet up with the ones who live far away, but we tend to encourage each other via Facebook posts, and even last year when I announced that I was giving up, I received plenty of messages telling me that even if I wasn’t going to go for the win, I should keep writing. I didn’t keep writing, but I DID switch back to spending my time working on other unfinished projects, so in a way, National Novel Writing Month still helped me buckle down a bit more than I would have otherwise.

And as for this year? Well, I’ve already begun my research and taken some basic plot notes, and I’m planning on inviting local NaNo friends to my house for our own write-ins, both because I hope that will encourage myself and others to write more, and also just in case the official write-ins don’t fit into my busy schedule.

I am of the belief that there’s really no one “right” way to participate in National Novel Writing Month. Yes, there are rules – you have to write 50,000 words of a new story to win, of course – but if you want to do that entirely in the privacy of your own home, do it. If you want to accomplish your word count by attending every write-in, that’s great too. If you feel like you can only win if you finish your novel, whether that’s at 50,000 words or 150,000 words, kudos to you. Or if you’re just using those 50,000 words as a jumping-off point (which is what I do) and you don’t complete your story during NaNo, it’s still an awesome way to get started.

In fact, the novel I won with in November 2012 wasn’t actually completed until March of 2013 – I added about 30,000 more words to the 50,000 I wrote during NaNo, and then took my sweet time editing it. But I did finish it, and extensive edits, and in December 2014, I published it via Amazon Kindle Direct. I’m still working on the novel that I began for NaNoWriMo 2013 – and I fully believe that eventually I’ll finish it, and edit it, and publish it, even if that means that I self-publish again.

The point of NaNo isn’t necessarily to be a social writer, or to write a full novel, or honestly – in my opinion – even to win. It’s simply to write. And it’s wonderful. So here’s looking forward to NaNoWriMo 2015!