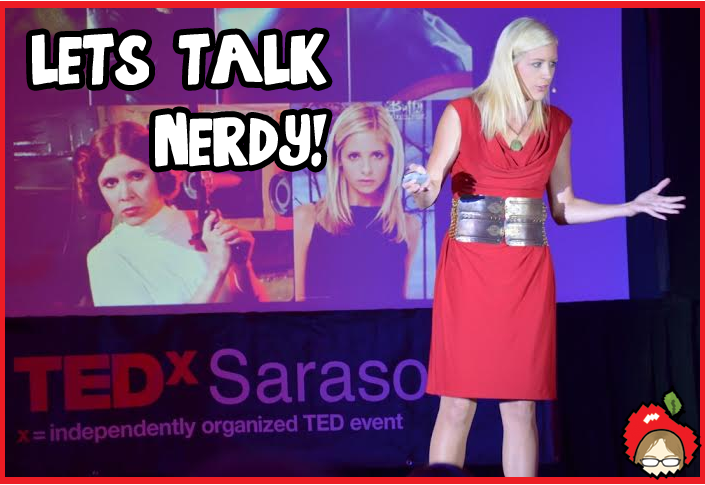 Last year I was presented with the amazing opportunity to give a speech at a TedX event in Sarasota, Florida. A friend had suggested that I apply, and my original speech idea was along the lines of “Women’s Roles/Voices in Geek Culture”. Little did I know how much that would change and evolve throughout the few months between being accepted as a speaker and the event itself.

As someone who is fully immersed in geek culture, I was admittedly surprised at the reactions to the first version of my speech. Basically, most of the people who heard it said that they either didn’t understand a lot of what I was talking about, or that they weren’t sure it was ‘universally palatable’ the way TedX speeches are supposed to be.

To be honest, it was difficult to take a step back from something I love so much and view it from an outsiders’ perspective. I wanted to use my speech to bring the idea of geek culture – and specifically, women’s involvement in it – to others. But suddenly I found myself wondering if it was even possible to do that in the twelve minutes I was allotted on stage.

Because that’s the thing you don’t know or see when you view Ted or TedX talks – that so much of the time, the end result – what you see live or online – is the product of months worth of coaching and feedback and editing (and in my case stress and anxiety and wondering if I’d ever get it right or if I should just admit that I was in over my head and throw in the towel).

My speech went through several iterations before it was completed, and as weird as it sounds I was both under- and over-prepared for the event itself. As fate would have it, I ended up giving a speech I was proud to have written…while suffering through a terrible case of bronchitis. I was medicated nearly out of my wits just to be able to get up on that stage, and this led to a lot more “um’s” and “uh’s” and other silliness that I wish I could edit out of what became the true final product.

But other than the difficulties that my illness caused (and of course the previous frustration with how to make my geeky story into something a bit more relatable to the general populace), TedX was nothing short of an amazing experience. I’m glad I didn’t throw in that towel, because not giving up meant that I got to spend nearly twelve minutes on a TedX stage, talking about the general ideas of self-defining oneself as a geek and how people can ‘geek out’ over so many things. Because there really are so many different kinds of geeks out there. I’m the geek who gets nearly obsessive over certain books and movies, who goes to conventions and speaks on panels about the things I love, who cosplays, who has a house full of Star Wars-themed rugs.

The question I tried to raise with my TedX speech was, what do you geek out about? And I’ll probably never stop talking about my TedX experience because that’s a conversation I’d like to keep going.

We at Some Nerd Girl wanted to know more about Tara’s experience – so we followed up with some burning questions!

What made you want to get your thoughts and ideas out there?

Well, I guess I’d been doing so for years through my blog and then writing for The Geekiary, as well as being a panelist at several conventions from 2012 on, but until my friend suggested that I apply to be a speaker, I’d never really thought about doing so – at least not for TedX.

What was your process for coming up with ideas and what you wanted to talk about?

When I was approached about applying to be a speaker, it was suggested that I stick with talking about geek culture, and to be honest, my original idea to focus on women’s roles/voices in geek culture immediately popped into my head.

How were you approached? What was the selection process like?

An acquaintance of mine was a speaking coach for TedX Sarasota and he thought I could bring something different to the table, so he suggested that I apply. I filled out the online application and was contacted maybe a month or two later – I can’t remember exactly how long. I’m not sure how the selection process went for TedX Sarasota, but I’ve since volunteered for TedX Greenville (just on the event staff) and I know that theirs is a pretty intense, time-consuming process, where they review all applicants, choose the ones they think best fit, and then continue to narrow it down from there. I’m assuming it’s probably similar with other TedX events.

Were you totally geeked out or were you like… of COURSE they picked me! ??

Oh I was totally surprised and nervous and excited. Even though I was encouraged to apply, I certainly never *expected* that I would be chosen. I actually had to keep it a secret for a while after I found out, and let me tell you, that was one of the most difficult secrets I’ve ever had to keep! I just wanted to tell everyone because it was such a big deal to me that I would get to be involved in something so amazing.

How familiar were you with TED Talks? Did you have any favorites that inspired you to go for it?

I knew about TED talks and had watched a few throughout the years, but before participating in this event I hadn’t really delved into them all that much. (Mostly due to lack of time on my part, to be honest.) That said, now that I’ve done one myself, I’m constantly on the lookout for good ones, new and old!

What was the biggest challenge you faced?

Definitely having to take my original speech idea and basically rework it entirely so that it was more ‘universally palatable’….although coming down with a horrible case of bronchitis two days before the event didn’t help things either. Giving such an important speech all doped up on cold meds (I didn’t have time to go to a doctor and actually get real medication until after TedX) and with a 100+ degree fever was difficult to say the least.

What, if any, feedback or comments did you get afterwards? The nerd/geek culture is not always kind to those who point out girls love nerdy things, too.

Actually, it was during the preparation process that I struggled a bit – not that anyone was rude, but there were a lot of comments from the organizer and even fellow speakers that were along the lines of “this isn’t interesting because we don’t understand it”. I tried not to let it get to me, but I definitely got really stressed out about it, especially when I had to rewrite my speech several times. In the end, though, the final product was very well-received. I was approached by several attendees later on that day – some of them wanted to discuss similar interests (I had a great conversation about Timothy Zahn’s Star Wars EU novels); others just wanted to share with me what THEY ‘geek out’ about. To be honest, it was those conversations that really made the event memorable for me.