So, to reiterate. GIANT SPOILERS AHEAD!

Also, a disclaimer; I really enjoyed Star Wars TFA – but as a nerd, I feel compelled, like many of my nerd brethren, to pick it to itty bitty pieces. That being said, I have some burning questions that I really hope will be addressed in the following movies. Many of you know that my nerd origin story is deeply influenced by Star Wars, and so these movies are very near and dear to my heart. And also very easy for me to obsess over. And with great obsession comes great ability to over-analyze!

And yes, I know there is a book, and a whole host of other references I could probably source to answer a lot of my questions but I am a busy professional, damn it, and it’s way more fun to speculate. Also, I want it on the pretty big screen. Anyhow, let’s get this listicle started.

1. Where the hell is Jakku, why is it important and what is with all these desert planets?

Despite the fact ‘Jakku’ was right there in the screen crawl as this movie kicked off, it took me WAY too long to realize this planet was not Tatooine. Mostly because I kept wondering why no one was calling it Tatooine.

Okay, so I typed Jakku into Google and evidently it’s a far out planet where people thought they could avoid the Empire on. Guess they were wrong. I still fully expect JJ to address why Jakku is where we find our loveable Rey.

2. The Big One: Who are Rey’s parents? And why would they abandon someone so awesome?

So it’s got to be Han/Leia or Luke/Mara(??), right? If this is a Solo, we have to assume she was stolen from her parents as opposed to willfully hidden by them. They clearly didn’t hide Ben, although I think we can all agree they really, really, really should have.

3. Why does the Republic know nothing about the Starkiller Base?

Come on guys, you’re losing your touch. Looking at you, Leia. Are you telling me that until Finn, a sanitation Stormtrooper, showed up, you knew nothing about the Starkiller Base? The Rebel Alliance was on top of it back in the day, stealing Death Star plans and getting the drop on the half-constructed Death Star. And you know this is the Empire’s / First Order’s go-to strategy.

4. Also, why is a sanitation Stormtrooper being sent to Jakku in a hunt for information about Luke Skywalker?

First of all, I have no idea how close the Starkiller Base is to Jakku. I also have no idea if that thing can even travel through space. How do you propel a planet? Actually, there’s a lot of questions I have about the Starkiller Base, but that is one thing I’ll allow myself to suspend my disbelief on. We needed a big threat. It’ll do.

Back to my original point; the Finn character while enjoyable in many ways… I am baffled by in terms of overall involvement. Also, I wonder why the brainwashing had less of an effect on him. He’s probably Force sensitive but it doesn’t seem to present in any particular way, except for maybe being drawn to the ‘Light.’ He immediately runs to Rey when he thinks she’s in trouble. For that, your nonsensical involvement is acceptable.

5. Why does Han think he’s a good smuggler?

I refer here to his line to Leia, “I just went back to doing what I was good at” or something along those lines. Han. Buddy. I love you, bro, but you are not a good smuggler. You’re terrible at smuggling. Every time we’ve seen you try to smuggle something on screen, you fail. You should have stuck to plucky Rebel capers. THAT you were good at.

6. Who is Space Hitler and why is Kylo Ren not Force choking the shit out of him?

There is an odd tension between Kylo Ren and General Hux that make it feel like they are both trying to one-up each other in order to impress Hologram Man (Snoke? I’m still learning these new people’s names). Hux’s wide-eyed fanaticism seemed like overkill, and I was really enjoying the prospect of Ren having a Force temper tantrum that resulted in many loss of limbs. Sadly, it never came. Ren was completely unaffected by Hux’s not-so-quiet insanity, and I want to know more about that dynamic.

7. What messed Ben up so much?

I don’t buy that Snoke seduced Ben to the Dark Side and That-Was-That. Anakin lost his mother, grew up a slave, was constantly denied in his aspirations as a Jedi, was defeated by Obi-Wan, left to die, and then informed upon his painful recovery that his one true love was dead. Granted, I think his seduction to the Dark Side was a little slap-dash as well (before the limb-loss and news of Padme’s death), but he would have never, I repeat never have killed a family member.

So I want to know what messed up Ben. And it better be believable and relatable. Because if JJ just killed off Han in order to make a ‘bigger, badder villain’ I’m going to be forced to write many a strongly worded articles about my discontent.

Be afraid. Be very afraid!

8. Did Ben regret killing his father?

Please, please let this be a featured struggle in the future movies. I noticed that when he is deciding if he will kill Han or not, there’s a reflection in each of his eyes – one red, one blue. I noticed this on my second viewing. And I thought to myself… wow, well done! I bet both reflections will be red when his Lightsaber activates.

But they weren’t. They were both BLUE. This, combined with how erratic and sloppily he fights Rey, indicates to me that he might have realized the instant he killed his father what a terrible, terrible mistake he had made. Perhaps instead of feeling the wash of the Dark Side fully embracing him, the Light lashed out and filled him with well deserved regret.

Overall, I loved this movie, and I am so very much looking forward to more. I’m unleashing my thoughts and questions here, in this magical place called the internet, in hopes I might get my wish of knowledge in 2017. (JJ reads all these, right??)

Do you have unresolved questions after watching Star Wars: The Force Awakens? If so, leave them in the comments and we’ll speculate together! 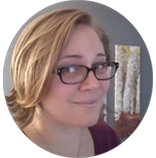 Eve is the founder of Some Nerd Girl and the author of urban fantasy novel Children of the Fallen and science fiction novel Colony One. She has been writing since the age of 13 and has been flying her nerd flag for the past 16 years. Fandoms include Star Wars, Star Trek and Battlestar Galactica. Basically if it has ‘star’ in it, she’ll give it a shot.

2 thoughts on “8 Burning Questions I Have After Watching Star Wars: The Force Awakens [Huge Spoilers, duh]”